Due to high demand, all orders are currently taking around 3-4 working days to be delivered. Please see estimated delivery dates during the checkout process.

With a texture somewhere between a hard caramel and a soft fondant, this crystalline candy has a creamy, smooth, inviting texture. It is a sugar candy formed by mixing sugar, milk and butter then heating it. As it cools the mixture is beaten into that unique texture. 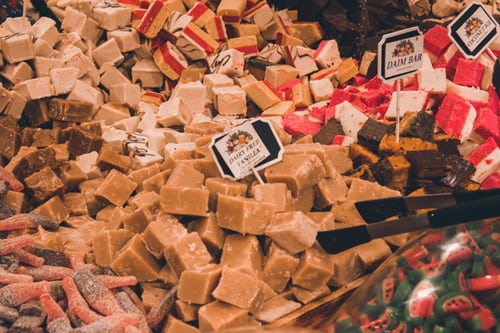 Where did it come from?

As with many sweets, the exact history gets lost over time and claims to have been the first to create them get exaggerated. It is commonly believed to have been first enjoyed in the second half of the 19th century. There is a romantic tale that the first batch was created on Valentines Day and America lays claim to this creation.

Historians and confectionery experts seem to agree that the word fudge was first used when the first batch was created as a result of an accidently “fudged” batch of caramels. This tasty, enjoyable mistake was seized upon as a new product. The oldest records of fudge appearing on a packet was in Baltimore in 1886.

It’s not Cornish then?

The original recipe for the fudge we enjoy today is claimed as British, especially in the South West of England. Even the Cornish though, accept that its origins started with the recipe being shared with girls’ colleges in the USA. Cornish, in fact British, fudge has stuck with the original butter, milk and sugar recipe whereas across the Atlantic it is often created with whipped cream instead of butter.

It is creamy and grainy.

Creating perfect fudge is actually quite scientific. The quantities of each ingredient, the temperature it is cooked at, the way it is stirred, the pace of cooling and the method of beating the mixture all need to be consistent to produce the ideal fudge. Many batches are rejected even with today’s technology available to manufacturers.

So what flavour is fudge?

Traditionalists insist that fudge tastes of, well, fudge! It really does give an eating sensation all of its own, in both flavour and texture. But, as time has gone on, people have found more and more flavours with which to enhance their fudge.

Some amazing flavours to try.

Here at Appletons we are happy to offer some of the more traditional flavours such as clotted cream and vanilla. Those looking for something more quirky in their fudge can try some banoffee fudge or even some which is infused with candy floss. Or why not go for a bit of luxury with our every popular Baileys flavoured fudge.

Whatever fudge your customers fancy, we are bound to stock it in our huge selection.

Get in touch today for great prices and fast, economical delivery.