When did trick or treat start?

Was the tradition started by one person thinking “I know, let’s dress the kids up and go and frighten the neighbours into giving them sweets”? Probably not. In fact the tradition has its roots in long forgotten times. The Celts, living in northern Europe, maybe 2,000 years ago, celebrated a festival known as Samhain. It was at the end of October to mark the bringing in of the harvest. It was believed at the time that the dead could rise at this time of year. People used to leave food and drink out as offerings to the spirits. Others then started to dress up in costumes and perform dances, or tricks, in return for this food. Some of these costumes would have been terrifying, having been made out of animal skin.

Jump forward a thousand years to England and the festival of All Souls Day was being celebrated on November 2nd. The dead were honoured, normally around bonfires, in ceremonies similar to Samhain.The poor would dress up and visit the home of the wealthy. They would be given what became known as Soul Cake which was exchanged for a promise to pray for the souls of dead loved ones.

Children started to take up the door knocking and would ask for food, money and even ale. The more Celtic countries would find children dressing up and going door to door to accept the householders offerings, often dancing, singing or performing tricks in return. 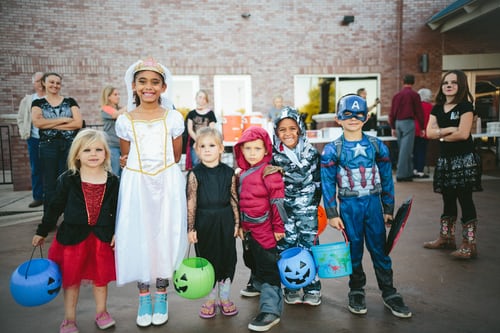 What about in modern times?

The tradition of going out on halloween in costume and asking for gifts does go back a long way, but the modern activity of ‘trick or treat’ can probably more likely be traced back to the mid twentieth century. In the 1930s the phrase seems to have become common in the USA and Canada, although the practise was paused during the lean years of WWII and the rationing years after. It was much later in the century that the phrase was adopted in the UK. Because of this, the celebration is often called an American import, although as we’ve seen, the origins go much further back in Europe.

What treats should we have ready this year?

The origins might be Celtic, but many of today’s youngsters are much tuned to the American culture and they’ll be happy to receive a treat from our USA Gift Box or maybe some Brach’s Candy Corn.

If it’s scary that you’re after, we have quite a selection; how about some Dracula Teeth from Kingsway or some Jelly Filled Skulls from the same company. Have a browse through our whole gruesome Halloween collection.

You may prefer to offer treats with less frightening or ghoulish appearances, in which case why not get in touch to get the best prices on a huge selection of snacking sweets.